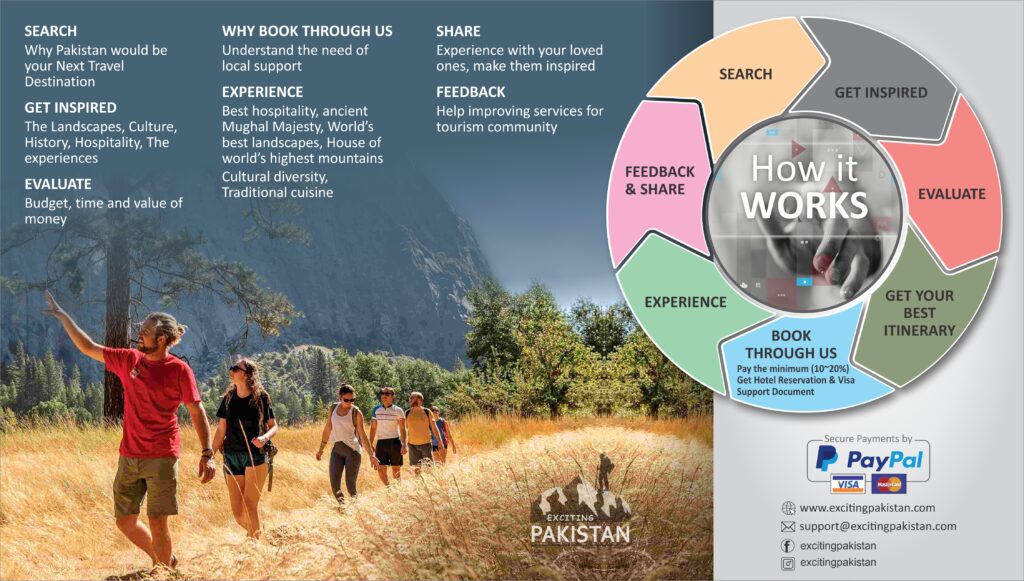 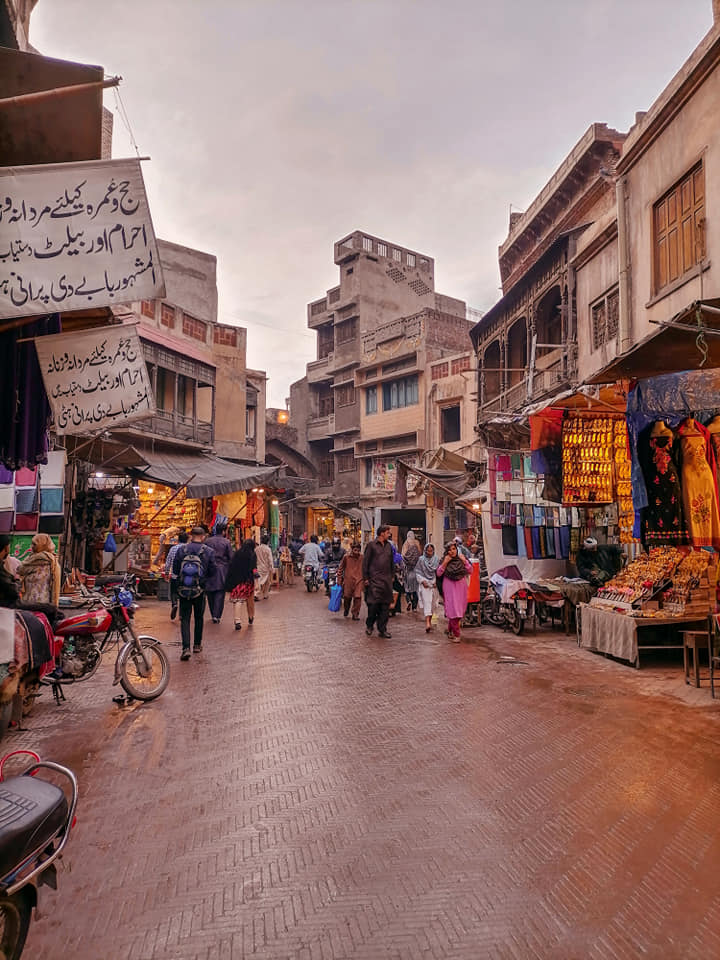 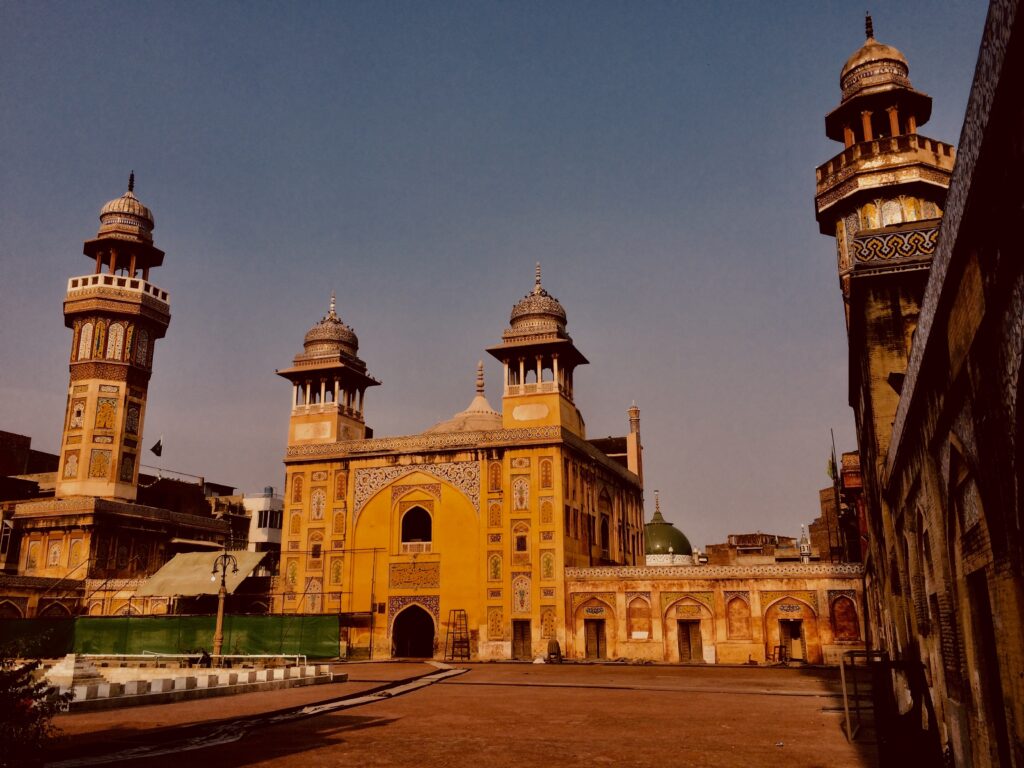 You will land at Lahore Airport and your journey begins to one of the world’s greatest ancient cities. For at least 2,000 years this northeastern city in Pakistan has been a center of learning for scholars, poets, and mystics.

The Walled City of Lahore, also known as Old City, forms the historic core of Lahore, Pakistan. The city was established around 1000 CE in the western half of the Walled City, which was fortified by a mud wall during the medieval era. The Walled City was bestowed with numerous monuments during the Mughal era, with some of Lahore’s most iconic structures being located in the Walled City, such as the lavishly decorated Wazir Khan Mosque, the massive Badshahi Mosque, and the Shahi Hammam.

It is said that who have not seen Lahore, isn’t born yet ( Local quote )

Islamabad, The City of Nature & peace

Capital of Pakistan, on the Potwar Plateau, 9 miles (14 km) lying at elevations ranging from 1,500 to 2,000 feet passing through Margallas, the hill range which is part of the Himalayan foothills located within the Margalla Hills National Park, north of Islamabad, Pakistan. The Margalla range has an area of 12,605 hectares. The hills are a part of Murree hills

This itinerary is designed for culture & history lovers.

Traveling has always been an important feature and is a key element in tourism. With the Focus on optimum comfort and efficiency we have developed best transport network according to the need of traveler consider the factors such as;

The various mode of transport can be broadly divided into the following three categories:

Expand/Close
Do I need advance booking to start my trip ?

Can I cancel my booking ? How about refund

Yes, booking can be canceled

Who will receive me at the Airport ?

How would I know about my hotel ?

After making advance payment (as mentioned in trip details), you will receive Hotel reservation vouchers from our team. Click to see our panel hotels.

Except some big cities like Lahore, Karachi & Islamabad; when you try to search for hotels online in smaller cities, you will probably only have a few options. You should know that not all hotels and guest houses in Pakistan are on booking websites. Even if you find one and book it, you will probably be asked to pay at the property rather than online.

We, exciting Pakistan team ensures advance booking of hotels as per your itinerary and travel needs through our network. You will receive reservation vouchers for starting & ending hotels before start of your trip. However, we use a variety of hotels en-route and so a complete list of hotels may or may not be provided until day 1 of your tour.

Would there be ‘meet & greet’ session with exciting Pakistan team ?

Yes, there will be half an hour orientation session in our office in Lahore, wherein, we will explain you each & every details before your trip starts. However, if you are starting your Journey from Islamabad we can have this session upon your visit to Lahore.

What type of ground transportation is used on your tours?

Trip specific information on transportation can be found on the ‘trip transportation tab’ and in ‘trip brochure’ however in most cases we use Toyota Grand Cabin ( Group 6~10), Toyota Coaster ( Group 10~18) and a Car Toyota GLI or similar for single or couple travelers. 4W Jeeps are used to ride on specific locations in mountains. However, we recommend that you use some of local transport as well to give a flavor to your journey through face-to-face interaction with the local people and culture.

Our panel drivers are best in town in terms of their experience and expertise to drive in hill locations.

Is there any compulsion for a tourist to hire local travel guide in Pakistan ?

There is no such compulsion. However, it is recommended to have local support specially in Northern areas.

Who are your travel guides and what is their role ?

We have dedicated local resources working in our team, who will guide and ensure your comfort throughout the trip. Role of travel guide is significant especially in northern areas who will help you on sites and activities like site seeing, camping, trekking, bonfire, river rafting, food arrangements, jeep rides etc. They would accompany you as and when required.

Do I need a local sim in Pakistan ?

Buying a Sim Card as a foreigner in Pakistan is not as easy as many other countries like you can’t buy it at the airport, However, you will be able to get prepaid SIM Card at Franchise. You must have your passport with you to be able to get one.

We can assist you to buy a sim upon your arrival in Pakistan. Basic sims are free with some data to consume.

Keep in mind that 4G internet is very cheap in Pakistan and the speed is usually good enough to share pictures, call your family via WhatsApp or post stories on Instagram. However, you may find some signal issues in northern areas especially during hiking / trekking.

How are Pakistani people in general ?

With the increasing trends in Pakistan tourism for last few years, Pakistani people have just started to relate them with tourists. They might stare at you or come to you for small talk or they might even ask for a selfie or hand shake. This is how they try to show their hospitality.

People in Pakistan are very kind and friendly. They want you to feel welcome and you will probably get invited for tea or sometimes even dinner. You will be feeling like ‘Center of attraction’, Enjoy the moment.

How many people can join a tour?

We keep our group sizes low so you have the freedom to move around and get involved with your surroundings, as well as more personal attention from our local guides. This intimate size ensures that your group will not crowd your experience. You can expect up to 15 travelers on a trip but the average is 8~10. Check individual trip pages for maximum group sizes.

What clothing should I pack for one of your adventures?

We always recommend packing as light as possible however the specific requirements for your tour will vary widely depending on where and when you are traveling. Our ‘Trip Details’ document includes a suggested packing list and these can be downloaded from each individual trip summary page. The checklist is tour specific and based upon the experience of our ground staff.

What is the most appropriate type of luggage to bring?

We strongly recommend bringing a backpack or duffel bag, as suitcases can be cumbersome and difficult to carry throughout.

Can you help arrange my travel visas?

Requirements for travel visas vary widely depending on your nationality. However, Pakistan tourism Ministry has eased-off the visa requirements for many countries aimed tourism promotion. See Pakistan Embassy contacts & visa requirements on our “Resources” page to websites that will help you through the visa process. You may be asked from local embassy to provide invitation letter from the travel company, which Exciting Pakistan team will arrange for you.

What vaccinations are recommended for this adventure?

Do your tours include international airfare?

Travelers arrive from all over the world to begin our tours and it is not possible to include international airfare in our prices. We would be happy to help you arrange flights. Just ask for an air quote when making your booking.

What are the age restrictions on your tours?

To travel independently you must be at least 18 years of age. There are no upper age limits for most of our tours. However, travelers with pre-existing medical conditions are required to consult their Doctors especially if they are planning to visit norther areas involving trekking & hiking activities.

I'm a single traveler, will I be charged a single supplement?

Most of our trips do not have a single supplement. This means that the accommodation is on a twin share basis and, if you are traveling on your own, you will be sharing a room with another traveler of the same sex. Ideally you should chose our trips as a couple or as group-travelers.

Can I join a tour late or leave it early?

It’s extremely difficult if not impossible to join a tour after it has begun. It is possible to leave a tour early however you will be responsible for your own arrangements from the moment you decide to leave the tour. You would also be responsible for all costs associated with joining a tour late or leaving one early. If you feel this may be necessary please consult our Travel Specialist before you book your adventure.

Who are my travel companions?

For privacy reasons we cannot provide you with advance details on your traveling companions. However, our tours appeal to a wide range of travelers, most of whom share an adventurous spirit and a desire to experience these destinations at a grass-roots level. Ideally you will be having separate hotel & transport arrangements if traveling as a ‘Couple’ or in groups of 4~6, 6~8 & 8~10 friends / family members. See transport tab under the trip section for details.

How is Exciting Pakistan able to offer such competitive prices?

This is of significance to know that Pakistan is low-cost country to travel. With the help of our local network we have able to develop ‘Services chain’ that help spending money providing an authentic experience, instead of on lavish hotels and expensive western-style meals. We pass these savings on to you with optimized quality in low-budget. We have developed a focused itinerary and targeted approach towards things-to-do. we do throw in the major highlights of a destination, the things that everyone goes to see. On every trip page we show you the ‘things Included ‘ of your trip, things that many other companies charge locally for.

Can I book extra nights of hotel accommodation before or after my tour?

Yes, in most cases we can arrange additional accommodation at our starting or ending hotels. Please contact Exciting Pakistan Travel Specialist for price information for hotel options. If we are unable to provide you with the extra nights we will give you the name of a hotel you can contact directly.

Is tipping included and if not, how much should I budget?

Tips are not included in the tour price and tipping is entirely at your discretion. Our Trip Details documentation includes suggested tipping amounts.

What food for me is recommended in Pakistan ?

Pakistan is considered as paradise for foodies. Food here, is characterized by a blend of various regional cooking traditions of the subcontinent, Central Asia as well as elements from its Mughal legacy. The various cuisines are derived from Pakistan’s ethnic and cultural diversity. Food ranges “mild to spicy” which is characteristic of flavors of the East. Your trip would not reach its full capacity without dipping into Pakistani food culture. Read our page on 21-top foods in Pakistan. 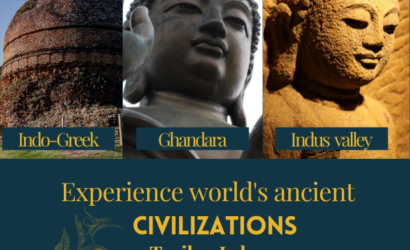 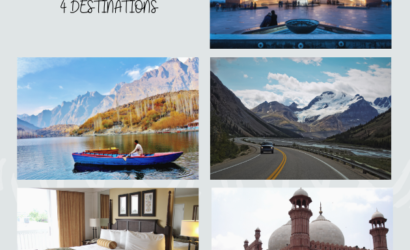 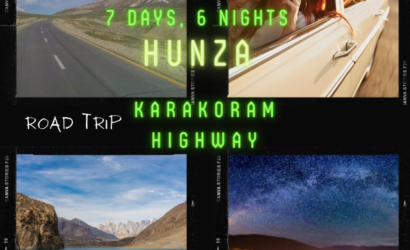 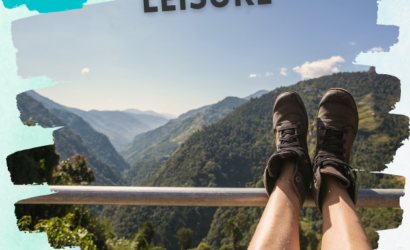